Is Social Networking a Slow Poison 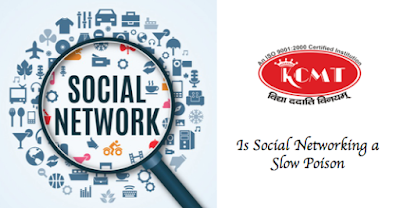 In these above areas social media presents clear benefits because this social networking phenomenon is relatively new. Very few researchers have stressed about the after effect of recurrent social networking media use, frequency and amount of time spent and after effect on the physical and mental health.This limited understanding is particularly concerning in the context of youth or young adult users, as they spend the most time for socializing online so they are therefor at the greatest risk of wearing potentially negative and hazardous effect.

Current article reveals on the basis of research that addiction of internet and high frequency of usage of social networking media affect the physical and mental health of youth and slowly making them patient of VTS-virtual technology syndrome. Hence the youth of today must know what is important and up to what extent, what is not important, time management, relationship management and setting priorities of life should direct our behavior at the time of using the virtual technology like social networking media. Last but not least one should always keep a watch and have periodic evaluation of technological effect on health and well-being because health is real wealth.

Popular posts from this blog

Here is how to piss off your stress during exam??

By Unknown August 02, 2017
Hello Student’s Greetings of the Day!! Every student who aims to become a high-achiever  will experience exam stress. It’s an unavoidable part of student life that can be a tough nut to crack. Remember students, stress exists for a reason and you can choose to let it be your downfall or use it to drive you to improve your work. To combat exam stress, here are some tips which you can use:- 1. Meditate  – An important practice to help slow down the mind, and increase mental clarity. 2.   Get your body moving  – Dance, workout at the gym, practice yoga, or go for a run. By moving your body, you are increasing the blood flow to your brain and melting away stress from your mind and body. 3.   Practice healthy eating  – Try avoiding foods with large amounts of sugar, eat a breakfast that is high in protein, eat green veggies at lunch and dinner, and drink mint tea throughout the day instead of coffee 4.   Stay hydrated  – Avoid drinks with lots of sugar and caffeine
Post a Comment
Read more

Do you know this MOST WONDERFUL PERSON?

By Khandelwal College of Management Science & Technology (KCMT) February 25, 2018
Hello Reader, Greetings of the Day!! After the long and exhaustive day and before retiring to bed,  do a little and important exercise and experience its miracle. Just sit calmly and talk to yourself for ten minutes. If you fail to do so you will miss the opportunity to meet the most wonderful person of the world. You will be surprised to see that the most beautiful person lies within you. This person you will find within you is illuminating with the supreme grace of the God. Moreover, this person is a highly dignified person with full of compassion, courage and humanity. The face of this person is an embodiment of virtues and shining without any comparison with  none. This person you will realize carries extremely high moral character without the iota of falsehood and mischief.  He bears mountainous determination  to render  all good things to the mankind  and to the society. He is ever ready to exhibit his power with which is decorated for the betterment of all hum
1 comment
Read more

What are the career & Placement opportunities after pursuing BSc Home Science?

By Yemen Pratap Maurya May 17, 2022
Dear Aspirant Greetings of the Day !! This is really inspiring to know  that you are thinking to opt  for B.Sc Home Science, which is one of the professional Courses to build a strong career path  for your future The main subjects which are focused on are as follows: Nutrition Human Development Human Resource Management Textiles Extension Education B.Sc Home Science scope in India career potentialities are pretty advantageous due to improved focus of the healthful way of life. Also, this area is gaining reputation in India. Besides, government jobs after B.Sc Home Science appeal to many candidates for a selection of jobs. Jobs for B.Sc Home Science graduates are mentioned below: Job designations for B.Sc Home Science graduates Food analyst Assistant Dietician Nutritionist Textile quality manager Food technician Family planning officer Nutrition expert Health care counselor Research assistant Dietitian Health Educator Executive Chef Product Executive KCMT Group of institutions, locat
Post a Comment
Read more